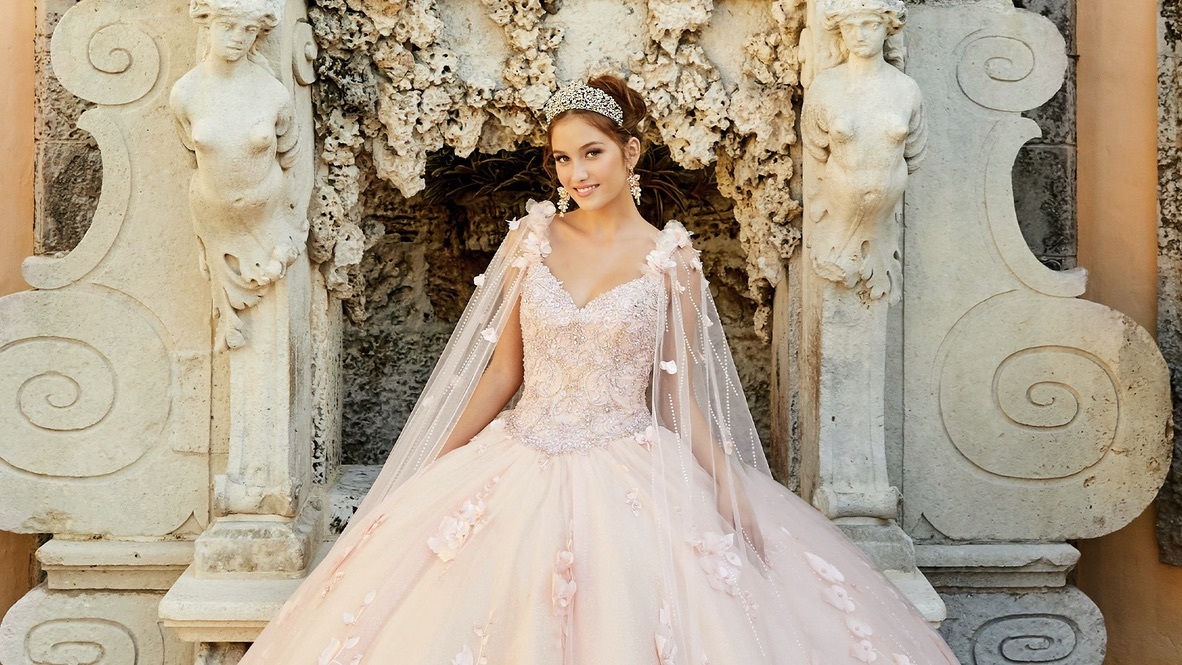 Over the years, the quinceañera has evolved in its celebrations, and the traditions of the rite of passage vary from country to country, but one thing is always consistent: the quinceanera dress. The bold, full ball gown is one of the tradition’s most iconic features. But how did the quince dress become so iconic?

The quinceañera as we know it today has origins in both Spanish and ancient Aztec culture. As Europeans and indigenious cultures collided, their various female rites of passage slowly combined to create what is now known as the quinceañera!

Originally, the quinceañera marked that a young woman was ready for marriage. That’s obviously not the case anymore—can you imagine if your chambelanes were there to impress your parents as potential suitors? Yeah, we can’t either. As time went on, by the 20th century the quinceañera began to look like what we know it as today: the party typically represented a girl’s transition into womanhood, when her parents would begin letting her wear makeup and attend adult parties.

Obviously a lot of rules and societal norms around the quinceañera have changed. Most girls have started wearing makeup before their 15th birthday, and “entering society” isn’t really a thing anymore—but the celebration of your transition from girlhood into womanhood is still the main point of the event. Now, it’s mostly just a big party, where you get to make cherished memories with your friends and family while wearing a gorgeous dress that makes you feel like  a princess.

The quince dress as we know it today wasn’t always the bold, full ball gown we know and love. In the quinceañera’s early stages (back when it marked your marriage eligibility—yikes), girls would wear either white or pink, and the dress wasn’t necessarily always a ball gown. Most girls would simply wear a nice dress, as the celebration was much smaller than what we know today.

As the quince evolved, ball gowns and the bold, shimmering looks that are so common in quinces today were typically reserved for wealthy families, as were bigger parties. Most girls had a smaller, more modest celebration—the commonality of all quinceañeras wearing a shimmering ball gown coincided with immigration!

In the 20th century, as Latin American families began immigrating to the United States and finding financial prosperity, they started holding big quinceañera parties like the ones in their home countries, and suddenly the big quince celebration wasn’t just reserved for the wealthiest of society. By the 1960s, across most Latin American countries, the ball gown was the go-to silhouette for quinceañeras, and designers and boutiques began catering to this demand.

Obviously, quince dresses aren’t just pink and white these days! The quinceañera has evolved to reflect each young woman’s unique personality, with a wide range of color and aesthetics. At the heart of the quinceañera, though, is always the same thing: a young girl’s transition into womanhood and a big, fabulous ball gown she’ll never forget.

Website uses cookies to give you personalized shopping and marketing experiences. By continuing to use our site, you agree to our use of cookies. Learn more here.